Faye Roswell is one of the main characters of Phantonics. After a mysterious fire destroyed her home as a child, hurting her sister and in some way killing her father, she shut herself down. However, with the help of her friend, Adam Grayson, she became her cheerful self once more.

Awakening to her Concept, Fire, Faye has to overcome her fear of the flames that originate from within her and protect the ones she holds dear. 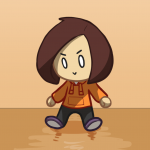